BOCA RATON, Fla., July 10, 2019 – Aerospace Technologies Group, Inc. (ATG), the world’s premier manufacturer of window shade systems for private and commercial aviation, is onboard to break the world record for the fastest circumnavigation of the Earth via both poles… Literally! The mission, titled One More Orbit, launched Tuesday at 9:32 a.m. EDT from the Space Florida’s Launch and Landing Facility at NASA’s Kennedy Space Center in a Qatar Executive Gulfstream G650ER equipped with ATG’s electromechanical window shades.

“Being able to witness a multinational attempt to break the world record live is incredible, and to do so knowing our technology is aboard the mission is an honor for all of us at ATG,” said Matt Duntz, Chief Sales Officer. “We couldn’t be more thrilled to support and be a part of this monumental mission proving that humans are continuously capable of pushing the boundaries of aeronautics.”

The Gulfstream G650ER is the fastest ultra-long-range jet in the world, capable of reaching Mach 0.925 and sustaining a Mach of 0.85. It is powered by two Rolls-Royce BR725 A1-12 Turbofans delivering 16,900 pounds of thrust, the extended range variant is capable of flying 7,500 nautical miles at up to 51,000 feet.

The aircraft, headed toward the North Pole, will stop to refuel three times— first in Nur-Sultan, Kazakhstan, then Port Louis, Mauritius and finally in Punta Arenas, Chile before flying back to Florida.

The current speed record was set in 2008 when a Bombardier Global Express jet reached an average ground speed of 511 mph. The trip was completed in 52 hours and 32 minutes.

One More Orbit’s plan is to remain at 516 mph for the entirety of the trip. They hope to break the current record by approximately 23 minutes over the 48-hour mission.

For more information about the mission visit www.onemoreorbit.com 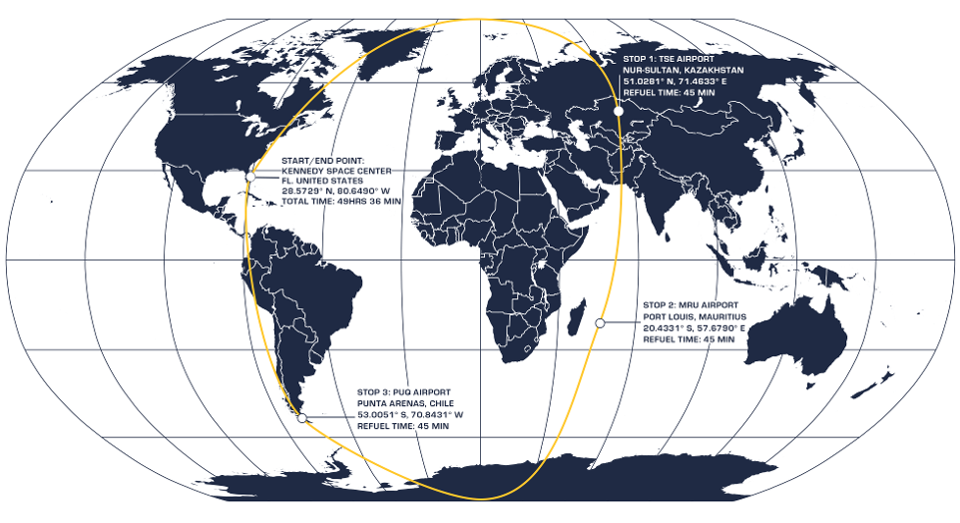